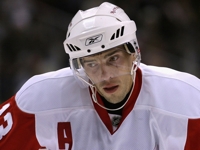 Until the age of 11, Detroit Red Wings star Pavel Datsyuk grew up learning to play hockey through small-area games on the natural ice between apartment buildings across .

The three time Selke Trophy award winner, who supports the Michigan Amateur Hockey Association's American Development Model proposal that is pending approval at the MAHA summer meeting, credits small-area games for developing the skill and awareness that he brings to his play in the National Hockey League.

"It is great to see USA Hockey take the steps necessary to increase the skill of their players at young ages," said Datsyuk. "The lessons learned in playing cross-ice hockey parallel what I learned during my youth playing in ."

Research shows that players who are trained in small areas get more puck touches, develop an ability to handle the puck in tight spaces, become more comfortable with body contact at an earlier age and are put in more situations that develop natural hockey sense and ice awareness.

The ADM program for children 8-and-under includes a practice structure that roughly doubles the active development time when compared to a traditional practice. The station-based practices provide a constant challenge to players of different abilities. With six-to-eight players in each group, coaches can adjust the difficulty of a drill at each station based on the ability level of the players in that group. During games, players are matched against opponents of equal ability.

MAHA, which has adopted this type of training at the 6-and-under age level, is proposing rule changes that would implement cross-ice games at the 8-and-under level for all players by the 2012-13 season.

"We are thrilled to have Pavel's support as he joins with the National Hockey League in its support of the ADM and cross-ice hockey at the 8-and-under age level," said George Atkinson, president of MAHA.

Dr. Stephen Norris is Director of Sport Physiology & Strategic Planning for Canadian Sport Centre Calgary and was the head of 's Winter Sports 'Own the Podium' project for the 2010 Vancouver Olympic Games. He has also been an advisor to Hockey in different capacities for over 12 years. Dr. Norris presents on Long-Term Athlete Development, and highlights coaching and administrative considerations in dealing with the development of age group sports such as youth ice hockey. His high performance and strategic planning background provide valuable insight into the process of how kids develop excellence in sports from the grass-roots level through truly elite adult performance. Watch the video of Dr. Norris' presentation.

Brian Burke is currently the General Manager of the Toronto Maple Leafs and was the G.M. of the silver medal winning 2010 United States Men's Olympic Hockey Team. He also serves as an advisor to USA Hockey and its National Teams. Brain speaks on USA Hockey's American Development Model, body checking in youth hockey and the challenges of coaching our sport. Watch the video of Brian Burke's presentation.

WHY PLAY HALF ICE?

Because your child will experience;

MORE touches of the puck.

The Kingston Study of 1976 (often cited by USA Hockey and MAHA) determined that the average 6-8 year-old playing in an average 50-minute full ice game received 20.1 minutes of ice-time, had puck possession for only 20.7 seconds, and had only 0.5 shots per game.  Historically, most full ice mini-mites rarely ever score a goal and some may never even touch the puck during a typical game.  In contrast, during an average half ice 3-on-3 game, an average player will receive 23 minutes of ice-time, 19.1 puck touches (totaling minutes, not seconds), execute 3.8 shots, and score 1.9 goals per game.  Basically, 1 half ice games is about the same amount of experience that players would get from 7 full ice games;  and with far more consistent results, not just 1 or 2 stars.

Some parents may be wondering why half ice, if they haven’t seen this concept in action.  The temptation is to think that this must only be about cutting costs.  Not true!  This is really about providing the best hockey pre-school anywhere on this planet.  Skeptics should try to keep an open mind; and try to believe in your child’s own natural ability to play, make friends, have fun, and ultimately develop a love for our game of hockey.  This is what makes champions; not a boot camp for 4-5-6 year-olds.

Coaches, please understand that in half ice you and the players being entrusted to you are going to be on the same bench as the team that you are playing.  Dads who are Coaches tend to be too harsh on their own children, often times without even realizing.  This has always been a problem with having parent coaches.  Try to understand that he/she is only 5-6 years old. Also, please try to understand that everything that you say and do is going to be taken in by all players from both teams.  You must keep things positive!  Scores are not kept for specific reasons. Those reasons are more about parents and coaches than they are about kids.

It has been widely known for decades that paying full ice hockey at Mini-Mites (ages of 6 and under) tends to develop 1 or 2 players per team.  Other families are merely left paying the bills; and those benefiting from this brand of hockey actually only develop 1 skill set.  Full ice mini-mites is all about breakaway hockey.  For many years, USA Hockey and MAHA have been presenting the half ice and cross ice concepts as better methods.  Both are more economical than full ice hockey.  Both are much better for developing skills within younger players.  Half ice hockey provides a smaller playing surface with yet enough room for players to skate, stickhandle, and even setup passing plays (something seldom ever seen within full ice mini-mites).  In addition, half ice places an emphasis upon quick evasive skating with lateral movement and tight turns, while still providing enough room for players to develop these skills at game speed.  Players can develop both skill and confidence in a fun environment.  Real hockey skills!  Perhaps the most important aspect of half   ice is the quickness of the game.  Players learn naturally to read and react to game situations, something sorely lacking from youth hockey during recent decades. Old-timers call this trait Hockey Sense.  Many think that Hockey Sense can’t be taught and in one sense they are correct.  However, Hockey Sense can be learned by kids through half ice and/or cross ice.

Long overdue is the American Development Model (ADM).  All kinds of miss-information has floated around about the ADM.  The most common fallacy is the notion that USA Hockey is only trying to create more elite players for the NHL.  I’m sure that they do hope that the cream will rise to the top.  However, nothing could be further from the truth.  USA Hockey’s focus is upon the vast majority of our players and upon the growth of our sport.  What is going on here in and is that we are finally recognizing that we can’t apply adult methods to younger kids.  And for decades, that is what we have been doing wrong in hockey.  We have pushed the adult envelope so far into the child’s world that we have destroyed the learning process and ruined their game.  We wouldn’t start out teaching a 5-6 year-old about Calculus or Shakespeare.  We first teach them the fundamentals and then build upon that foundation.  All good teachers understand that with younger kids, everything needs to be some kind of a game.  With half ice, we are merely shrinking the ice surface to provide an environment more acceptable for skill development.  An environment where 4, 5 and 6 year old children can play, make friends, have fun, and experiment, and most importantly, develop a love for the game of hockey. So that in 5, 10 or 15 years from now they will still have that passion and still want to play.

We opted not to keep score, at first only because we didn’t know how to keep score of two games at the same time.  This may have been the luckiest accident that could have happened. With not having to worry about win-loss records, the emphasis switched to skill development and FUN.  We also learned to not conduct a face-off after every play stoppage.  However, with so many goals and shots on goal, if

we have a face-off following every play stoppage then we spend too much time getting ready to play and not enough time actually playing.  In response, we began just throwing the puck to a neutral area and there they go!  Five or ten seconds later and it’s another goal.  An added point about not keeping score.  The first thing that we learned about half ice at this age is that there will be a lot of goal scoring.  We even worried about our goalies at first.  We were afraid that they may get upset at giving up so many goals.  However, with nothing on the scoreboard and with the other goalies giving up 10, 12 or 15 goals a game as well, nobody appeared to care.  We even have a clamor to play goal.   It’s just a game. Now, some players will always know the score.  The big difference is that many of the parents and some of the coaches won’t. The score and who wins or loses is no longer a big deal.  It’s playing their game and having FUN that matters now.

Hockey is the ONLY major sport that doesn't shrink its playing surface to match the age group . . .

Where can I find more information on USA Hockey's American Developmental Model?

What are the building blocks of the ADM?

What is long-term athlete development?

What are High Performance Clubs?